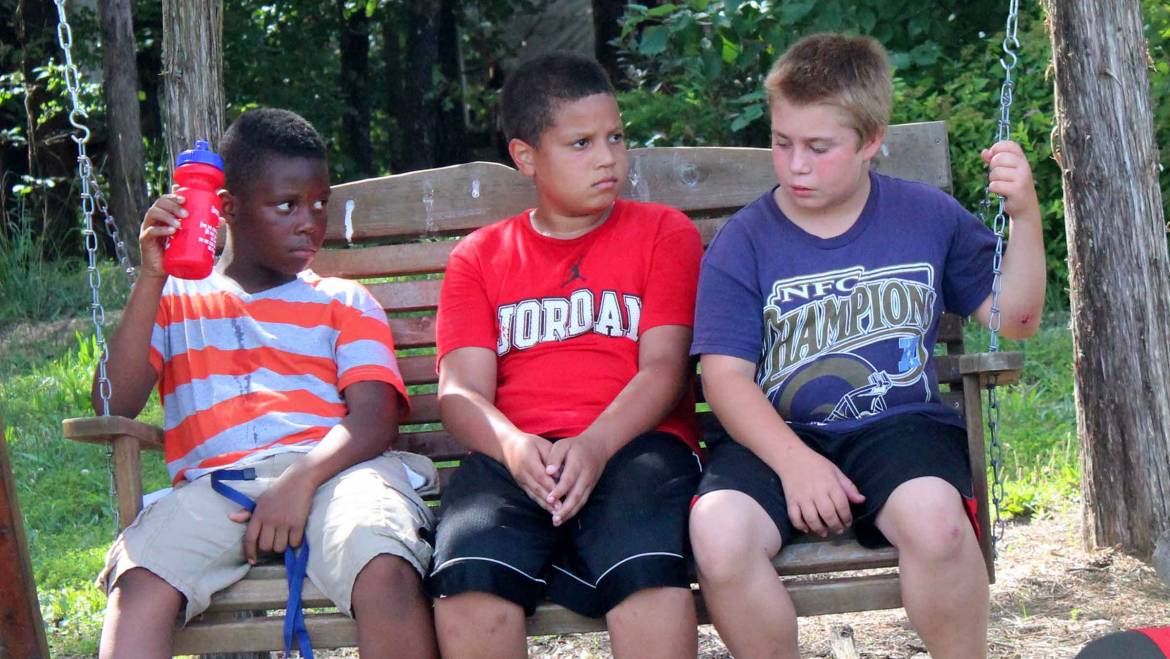 “My dad is in for life, but I still get to talk to him on the phone sometimes!” said Antonne,* who was beginning to open up to his team and counselors on the third evening of camp.

Antonne is a remarkable young man. He had come to camp for several years, and when our team met on Monday, he was clearly the veteran. Antonne liked to leave an impression, and rarely missed an opportunity to make everyone laugh, though often at someone’s expense. He also wanted everyone to know that he could stick up for himself, and that he deserved respect.

Before the first few hours of Monday had passed, Antonne had already gotten into trouble with several other campers. He knew all the right things to say to make good with the leaders, and was always the first one to say he was sorry, but it was clear that it was little more than words to him. He went from one fight to the next to the next, and showed no sign of slowing down before the week was out.

Each time a “conflict” came up, I was there to work through it with those involved, and I spent a lot of time with Antonne! As his head cooled,  I would ask him questions about why he kept getting into trouble. Time and again, I’d try each technique to help him be able to interact with his peers, and I would constantly be in prayer for Christ to reach Antonne and change him, but it seemed fruitless. His father was his hero, and he seemed destined to follow the same path that had put his father away for life.

Antonne did have many questions about God and the Bible. He had been told all his life that God didn’t care, that God was fake, and that God was responsible for the bad things in his life. I shared stories from my life of knowing and seeing Christ, and Antonne seemed really torn.

By Wednesday, Antonne was sick of me. We’d spent several hours sitting and working through conflicts while the other campers enjoyed field games and other activities. He had just exchanged threats and insults with another camper, and I was there to talk to him. After a few minutes, I started asking him about his family, home, and school. Antonne seemed confused: “Can I just go say I’m sorry, and play the game?” I thought for a minute, and replied, “I really want you to be able to play the game, Antonne!” He looked somewhat perplexed, and so I continued: “That is the reason why we sit out to talk through these things! I really care about you!” Now I could see a glimmer of understanding as he seemed to be deep in thought, but after a minute, he seemed to back to his old self.

It was before dinner that same evening, and he was washing his hands, when one of his rivals casually threw an insult toward Antonne. I could see him tense up, and so I tried to remind him of all that we’d talked about by softly saying, “What do you think you should say back?” He turned my way, and I could see him realize what I meant. He turned to his antagonist, and said “Hey… I like your shirt.” My heart leapt with joy at seeing a response I had grown to think impossible! Antonne was overcoming evil with good! My joy turned to fear a second later when the antagonist, confused by Antonne’s kindness, called him a name as he turned to walk away. Then Antonne snapped back with “I like your shoes, too!” I put my arm on his shoulder, and told him I was proud of him. Antonne seemed to be a new man from that point; he didn’t have one more conflict for the entire week, and his questions about God took on a more personal aspect. At the end of the week I asked, “Antonne, have you decided to follow Jesus?”

He looked me in the eye and said, “Micah, I’m not sure. It’s a hard thing to do. But I want to. I want to follow Jesus!”