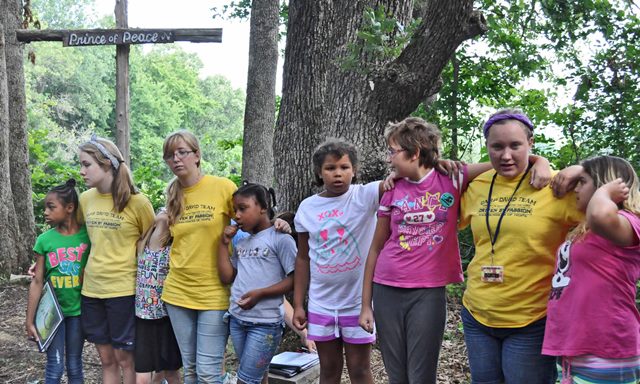 Eight year old Caysha* is my light-haired camper with beautifully expressive eyes. They light up when she smiles, but most of the time, they are clouded by her frown. The counselor coach and I sit next to her and ask her what’s really going on.

Caysha lowers her eyes. “My dad’s in jail.”

I try to choke down my tears, but I feel them brimming to the surface as I instinctively touch her hand. I know that all of our campers have a parent in prison, but Caysha is by far one of the most depressed campers I’ve ever had, and it hurts to know the reason. That night, Caysha and I sit out on the porch and she tells me bits and pieces about her life. As she realizes that it’s a safe place to talk about her feelings, she becomes a little more open. Finally, she asks the big question.

“If God loves me and He’s really in control of everything, then why did my daddy go to prison?”

I take a deep breath and say a silent prayer to God for wisdom, thanking Him for Caysha’s raw honesty. Then I try to plunge into those answers, attempting to explain to an 8-year-old little girl why the world is so messed up. At 8 years old, my biggest problems revolved around what I would name my doll and the fact that my two front teeth hadn’t grown in all the way. At 8 years old, Caysha struggles to survive emotionally and spiritually.

“Do you sometimes struggle with being angry with God because your dad is in prison?” I ask gently. She nods and tears roll down her cheeks.

“Well, I want to tell you something really important. You know how you prayed last night to be God’s child? Well, the Bible says that you and I are both His children, but He makes extra special promises to kids who don’t have daddies. That doesn’t mean that anyone is going to replace your dad in your life, but it does mean that God can take away your hurt and your pain. The same God who created the world and who created you and your daddy wants to be your Father too and He cares about you.”

She wants to know more about that. She knows the head knowledge about God, but she doesn’t have the heart knowledge. Throughout the whole week, she has nightmares. Her mom’s boyfriend forced her to watch a popular series of horror movies about voodoo dolls. He would hold down her hands every time she tried to cover her eyes. One night, I promise to stay beside her bed and pray silently for her until she fell asleep. She sleeps until early morning, and then wakes me once again right from out of her nightmare.

The next night, I take a new approach. I kneel by her bed and take both of her hands and pray out loud. I pray against dreams of voodoo and ask that the Lord would place a hedge of protection around her thoughts and dreams in the name of Jesus.
Caysha slept through the night for the first time in a week.

The last day of camp, we have a special moment in the forest. The campers and counselors all gather at a wooden cross and are handed pen and paper. The campers get an opportunity to write a hurt or pain on the paper and “Leave it Behind” at the foot of the cross. Caysha takes the paper and turns to me. I know she hasn’t learned how to write much more than her own name, so I ask her if she would like me to write something down. She nods.

“Do you want me to write about it?” She looks me in the eyes and nods again. And on the paper, I write the straightforward truth:

My Daddy is in prison.

“Caysha, I want you to know that when we bury this paper at the foot of the cross, it means that you’re giving Jesus control of the situation, no matter what happens. Are you still okay with doing this?” She nods, takes the paper from me, and drops it in a hole in the ground.

Together we sit at the foot of the cross, tears streaming down our faces.

Jesus is more powerful than this. Jesus has control. And we will trust Him.

Every week, the Lord is using Camp David of the Ozarks to reach kids like Caysha — to show them His plans for them. I believe that God has something far greater than prison or depression planned for Caysha, and this was only the start of a great adventure He has planned for her life.